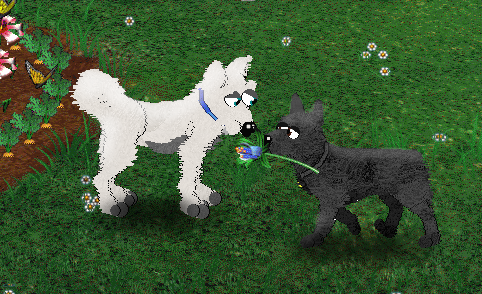 Frostsong: *looking at the garden enjoying the warmth while she still can before they have to leave for the race*

Nightfall: *sneaks up behind Frostsong* Hey Frostsong... Umm... there's something I want to tell you before we leave for the race...

Frostsong: *turns and see's Nightfall holding a flower and tenses up*

Nightfall: ... I though about waiting until afterwards, but I just couldn't. So here it goes, Frosty you're an amazing girl and I have really grown to like you over these past few months and I was hoping, after we got back from the race, that you might go out with me? ​ 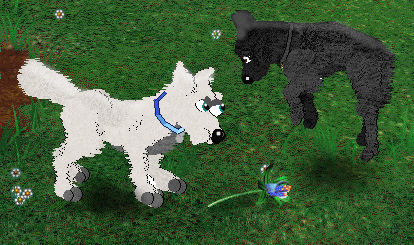 Frostsong: You should be ashamed of yourself, thinking about this instead of the race. were you even giving it your all during practice or were you thinking about this the entire time? Besides you know I'm with ShadowHawk and that I'm happy with him. I can't believe you. *runs off*

Nightfall: *sighs* I should've known this would happen, how are we ever going to be able to run the race with her mad at me? I should've just kept my mouth shut. 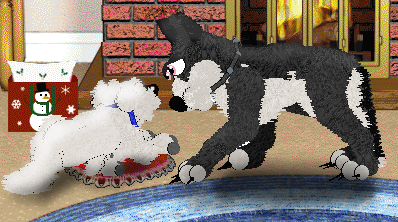 Frostsong: *crying*
ShadowHawk: Hey what's wrong, Frosty?
Frostsong: It's nothing, don't worry about it
ShadowHawk: It's obviously not nothing, and I am worried about it and you. Now will you please tell me?
Frostsong: I told you it's nothing
ShadowHawk: Please? I'll give you a treat if you do.
Frostsong: Fine. *tells him about Nightfall* 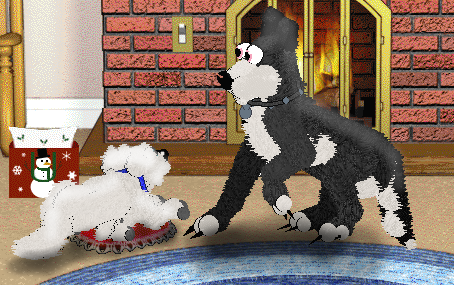 ShadowHawk: He said what?!
Frostsong: Yeah...
ShadowHawk: *thinks for a minute* You know, you could give the guy a chance.

Frostsong: *nuzzles him* But I like you
ShadowHawk: And I like you, however you haven't dated anyone else and I'd feel better knowing that you chose me rather than you got stuck with me because you were too afraid to try dating someone else.
Frostsong: But...
ShadowHawk: Come on I've seen you two together, he makes you happy too. Remember all that time you two spent together at practice? ​ 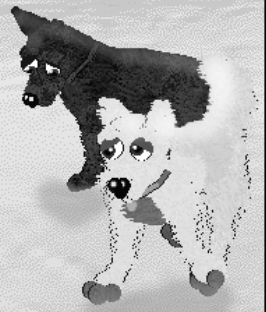 Frostsong: Yeah... but
ShadowHawk: No buts. I love you, but I think you should give the poor guy a chance.
Frostsong: I'll think about it
ShadowHawk: That's my girl

Fea: What's this flower doing here? *looks closer* I've never seen this kind of flower before, we don't keep anything like this in our garden. *picks it up* 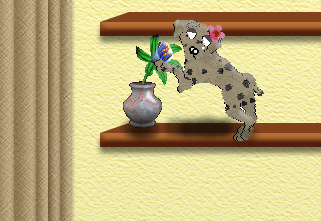 Fea: There now you'll live longer and be pretty. I'm gonna go tell Mom about you *runs off*
*Frostsong enters the room and notices the flower* 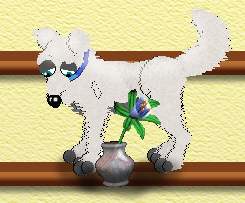 Frostsong: I wonder who found it and put it here? *looks at it for awhile and sighs* Maybe I should give him a chance, after all ShadowHawk wants me to so... maybe. I'll sleep on it and give Nightfall an answer later... maybe...

I didn't lose any dogs, but Honey and ShadowHawk fought with no injuries. You ended 10.36 Miles outside of Rohn.
​
Made it through:
Anchorage
Willow
Yentna Station
Skwentna
Finger Lake
Rainy Pass

I ended 1.31 miles outside Ophir. Melvin got sick.
Made it through:
Rohn
Nikolai
McGrath (Mandatory 8 hour stop)
Tokotna

FrostSong: *whispers* Hey Nightfall are you still awake?
Nightfall: *whispers back* yes
FrostSong: Can we talk?
Nightfall: Right now?
FrostSong: Well not right right now but... can we get up and then go talk somewhere away from the team?
Nightfall: I guess... but only for a minute, we're supposed to be resting 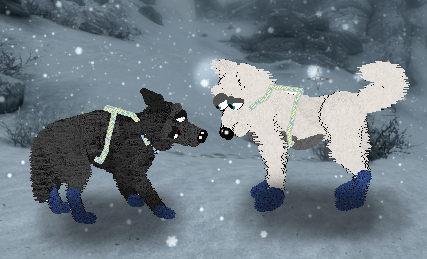 Nightfall: I'm sorry for the other day, that was insensitive of me.
FrostSong: No, it's fine.
Nightfall: No it's not, I knew you were taken and shouldn't have said anything. Does ShadowHawk know?
FrostSong: He knows
Nighfall: Is he mad?
FrostSong: Funny you should ask... 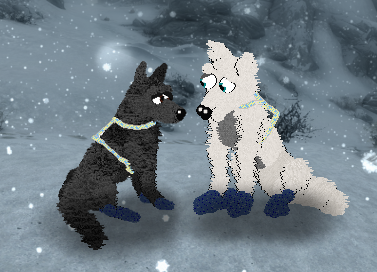 FrostSong: He actually encouraged me to accept your offer, he thinks that I should try other options before settling with him.
Nightfall: Well I'm glad he's not mad.
FrostSong: Well do you still want to go on that date after we get back from the race? 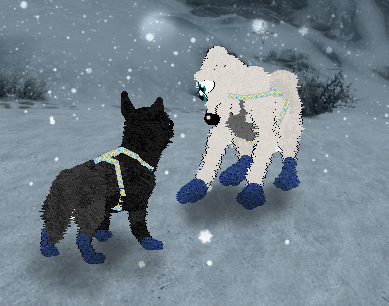 Nightfall: No, it wouldn't be right.
FrostSong: What do you mean? Isn't this what you want?
Nightfall: No it's not what I want. I want you to accept because you like me, not to make ShadowHawk feel better about being your only relationship.
FrostSong: ...okay.
Nightfall: Come on, let's walk back to camp. 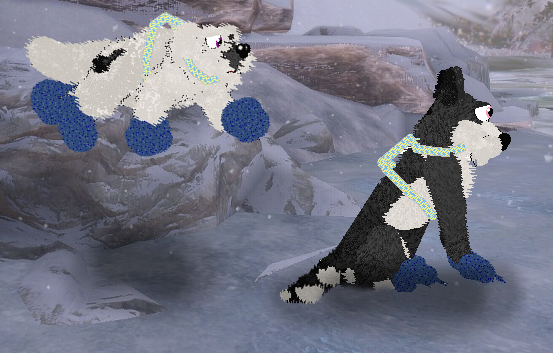 ShadowHawk: *sighs* I wonder if FrostSong has talked to Nightfall yet
Tchaikovsky: *sneaks up and pounces* ShadowHawk!!!
ShadowHawk: *turns towards noise* oof 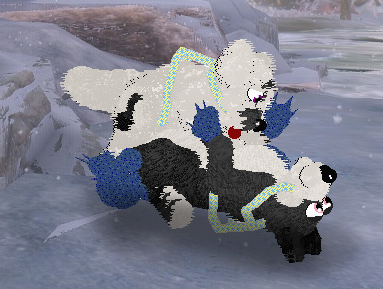 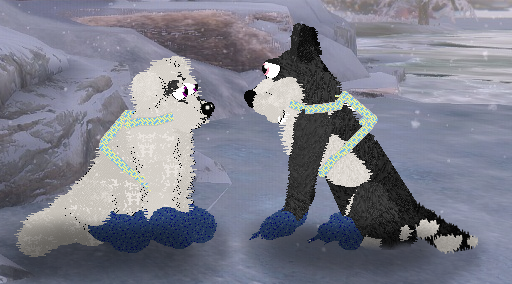 Nightfall: ShadowHawk, can I talk to you?
ShadowHawk: Sure 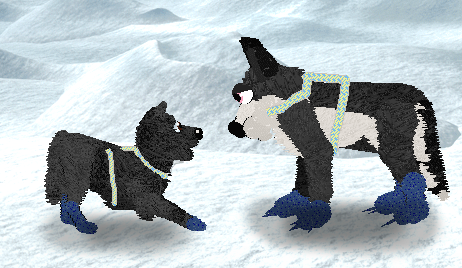 Nightfall: I'm sorry about asking FrostSong out, I was out of line.
ShadowHawk: It's okay
Nightfall: No it's not, you even told her she could go for it... 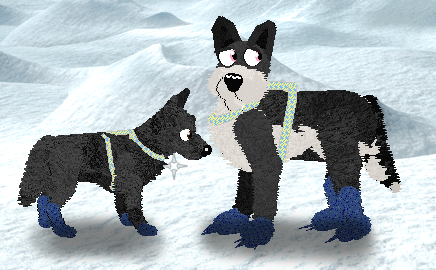 I have 12.35 hours left in Ruby. Tchaikovsky was injured, and will be left in Ruby. Melvin is still sick.
I made it through:
Ophir
Cripple
Ruby (Mandatory 24 hour stop)

I Ended 25.63 miles outside Kaltag. Melvin recovered from his illness.
Made it through:
Galena
Nualto
Kaltag

--- Just before the White Mountain checkpoint---
​
Nightfall: *pants* hey Frostsong, can we talk at the next rest stop?
Frostsong: *pants* If I make it that far
Nightfall: Don't worry we're almost there
Frostsong: Good because I don't think some of us can go much farther.
Nightfall: I know what you mean 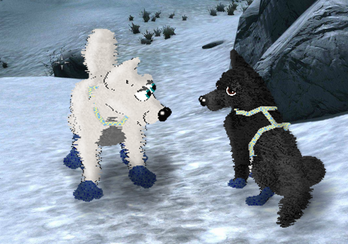 Frostsong: So what did you want to talk about?
Nightfall: Well... I know you aren't going to like this and probably are going to say no but... will you go on a date with me after the race? 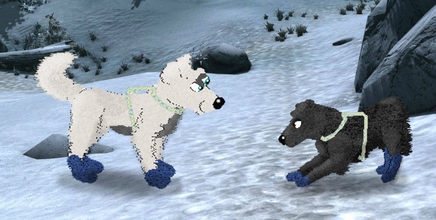 Frostsong: Are you KIDDING me?! After all this trouble you've caused, do you really think I'd even consider going on a date with you?
Nightfall: No, I'm s...
Frostsong: Hush! I wasn't finished yet! You must be bone headed buffoon to think that I'll go out with you after getting turned down by you when I was trying to be nice and make up for my original rejection.
Nightfall: I know and I'm s...
Frostsong: Stop interrupting me! You've ruined my relationship with ShadowHawk and have no regard for other people's feelings. Give me one good reason why I should go on a date with you.
Nightfall: ... because you want to go on a date with me... 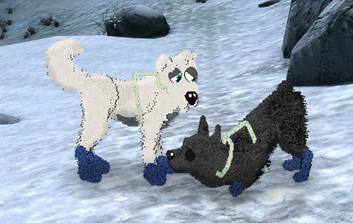 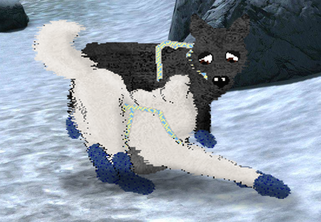 Frostsong: *Clears her throat and jumps away* Anyway we have a race to run before we can do anything, so let's get to it!
Nightfall: *Smiles* Alright, Frostsong, let's go.

---Nightfall and Frostsong walk back to camp and curl up to sleep with the rest of the team.---

Gerard: *Yawns loudly*
HoneyBear: *Whispers* Gerard stop yawning and come sleep.
ShadowHawk: I hope Tchaikovsky is okay... I wonder if Nightfall asked her yet, did I do the right thing telling them to try? Ugg at this rate I'm never going to get any sleep.

Story is Continued in "Love Knot"