Continuation of the Iditarod Race

After finally getting back from the race, Nightfall had me give him a bath and help him prepare for his date with Frostsong...
Then, while he went to set up the date, Frostsong requested my help... 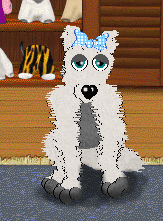 Frostsong: Mom, I'm not sure I like this bow. Doesn't it look a little childish?
Penny: *Sigh* What about this one?

Frostsong: Hmmm... I like it!
Penny: Good, now stop making Nightfall wait and go meet him for the date.
Frostsong: Umm... did he tell you where the date was going to be?
Penny: I think he said something about dinner in the attic...
Frostsong: *scrunches her nose in disgust* the attic?
Penny: Just go, I'm sure it'll be fun. ​ 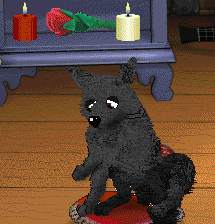 Nightfall: Where is she? She was supposed to be here two hours ago... 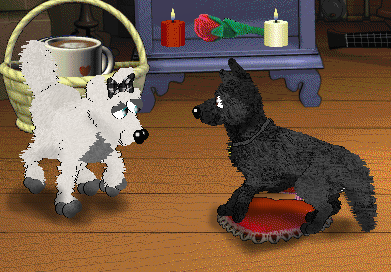 Nightfall: Wow! you look great!
Frostsong: *Blushes* Thanks
Nightfall: Shall we? Penny helped me make something special for dinner...
Frostsong: You can cook?
Nightfall: Kinda..

Frostsong: This looks delicious!
Nightfall: It's nothing special...
Frostsong: Sure it is, I can't cook to save my life. In fact Penny banned me from the kitchen after my last attempt...
Nightfall: What'd you do?
Frostsong: Oh, nothing... anyway let's eat! 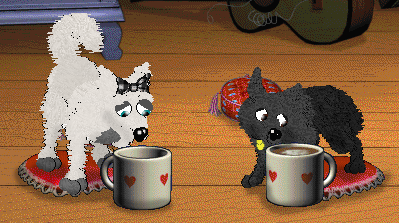 Nightfall: You finished that really quickly
Frostsong: *Blushes* well, it was good and i haven't had hot chocolate in forever...
Nightfall: *Chuckles* I'm glad you liked it.

Nightfall: You know, you have really pretty eyes
Frostsong: So do you...Ummm... Handsome, I meant handsome eyes.
Nightfall: Thanks 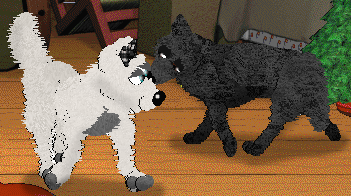 Nightfall: So did you pick that bow just for me?
Frostsong: Of course not! I just wanted to change things up a bit after having to wear the same thing everyday during the race...
Nightfall: Well, it looks great on you
Frostsong: You really think so? It isn't too... dark?
Nightfall: No, it really brings out your eyes. 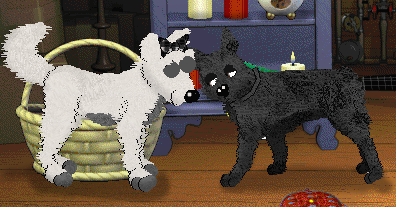 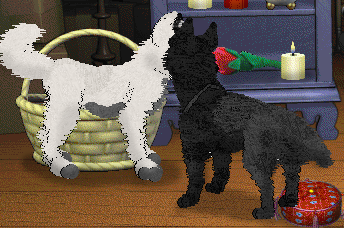 --Later that night... before midnight-- 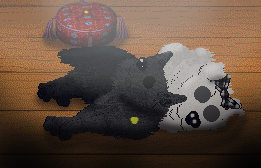 Some of the boys went to the local club to celebrate getting back from the race and New Year's Eve. 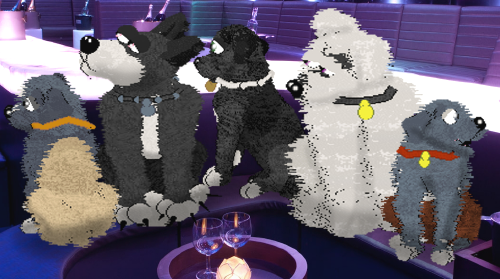 ShadowHawk: I wonder what Frostsong is doing tonight, maybe she's on that date with Nightfall
Gerard: I shouldn't be here, HoneyBear is going to kill me when I get home and she finds out that I went clubbing instead of spending quality time with her.
Melvin: This place is soo COOL!
Tchaikovsky: This is a really good song... 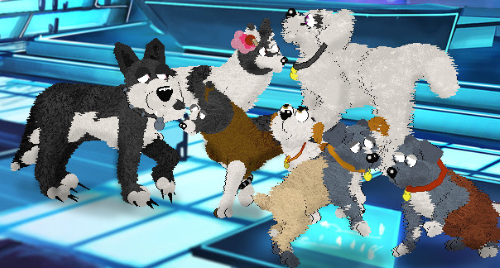 Tchaikovsky: Happy New Year, Sweetie
Mystery Girl: Happy New Year, Tchaikovsky
Tchaikovsky: *Kisses her*
Mystery Girl: Will I see you again?
Tchaikovsky: You can count on it
--Several Months Later--
Frostsong had her puppies and I had made a decision that was about to change the lives for everyone in the pack.
​
Penny: Alright everyone family meeting! Everyone gather in the living room!
*Whines of displeasure at being called away from their daily lives for a meeting and the sounds of paws hitting the floor as my crew gathers in the living room* 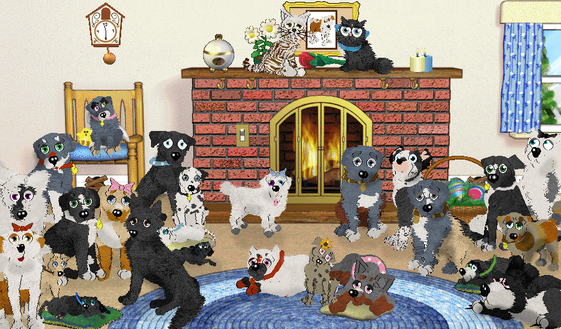 Penny: Thank you for all gathering in such short notice, I have an announcement that will effect all of you... We're moving!
Crew: ...
Penny: Oh come on, show some excitement! We've needed more room for awhile plus it'll be a new home with plenty of places inside and outside to investigate!
Crew: ...
Penny: *sighs* I'm sorry guys, but this has been coming for awhile now. Please have your things packed and ready to go by tomorrow morning, please share this information with anyone who didn't come when I called. *Leaves room*
*Crew disperses in small groups with whines of depression, anxiety, and excitement*

Ginger: *walks up to ShadowHawk* Hi! Who are you?
ShadowHawk: *mutters* ShadowHawk.
Ginger: What's wrong? Don't try to pass it off on the news that we're moving, you looked depressed before the meeting even started.
ShadowHawk: What's it to you? *narrows eyes in suspicion* And who are you, I've never seen you before.
Ginger: Oh! That's right, not many of my fellow pack mates know me! I'm Ginger, I've been around for forever. I just don't have time to play with everyone else, I model and travel a bunch because of it. Don't you recognize me from the pictures around the house?
ShadowHawk: I guess you do look a little familiar...
Ginger: Anyway what's wrong?
ShadowHawk: It's nothing.
Ginger: *sighs in frustration* Come on, let's go on a walk it'll get whatever it is off your mind. *drags him out the door* 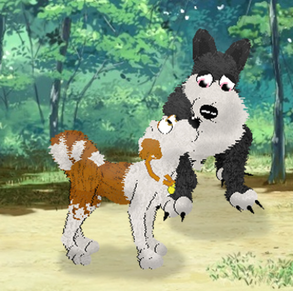 Ginger: See, isn't this nice?
ShaodwHawk: I guess
Ginger: And it's such a pretty day! Look how bright and clear the sky is!
ShadowHawk: *looks at her in the sunlight* Yeah. Pretty.
Ginger: *looks at him* You know I didn't notice it before, but you're really big!
ShadowHawk: ...
Ginger: Oops, sorry. I said something that made you uncomfortable...
ShadowHawk: It's okay
Ginger: So are you going to tell me what was on your mind?
ShadowHawk: *sighs and starts walking again* Well it all started just before the Iditarod race a few months ago when he made a move on my girlfriend... 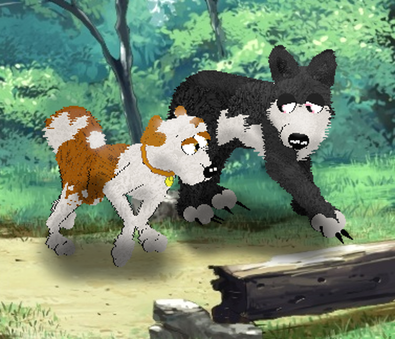 ShadowHawk: ...so New Year's Eve rolled around and they went on a date, they've been inseparable ever since.
Ginger: I'm so sorry, it must hurt to see someone you love with someone else.
ShadowHawk: More than you know
Ginger: You're very commendable though; you let them go on a date even though she was yours, you let her go when she found someone else, and you don't interfere with their relationship. She's luck to have a guy like you in her life, any girl would be lucky to have you.
ShadowHawk: You think so? 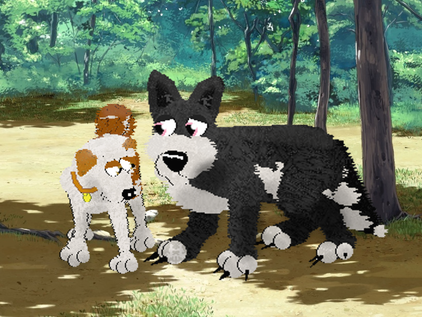 Ginger: *Stops walking* Definitely! In fact here's a crazy idea, go on a date with me once we get settled into the new house!
ShadowHawk: I don't know... I don't want to hurt you by still having feelings for someone else.
Ginger: It's okay Think about it and let me know, or rather let Penny know since she'll be easier to reach than I will.
ShadowHawk: Alright, I'll think about it
Ginger: Great!
Meanwhile... 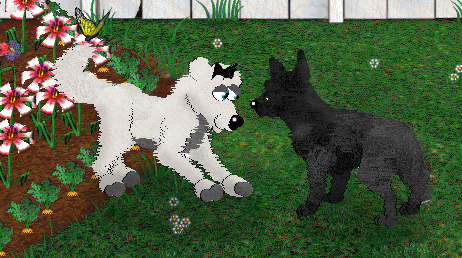 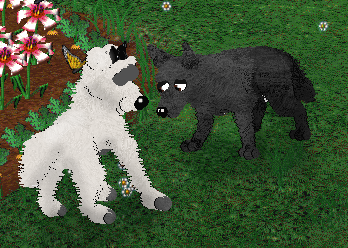 Frostsong: *blushes* Well.. I actually have some news for you as well, we're going to be parents.
Nightfall: Really?! That's great news, how long have you known?
Frostsong: Just a little while, I wanted to wait to tell you until I was sure. 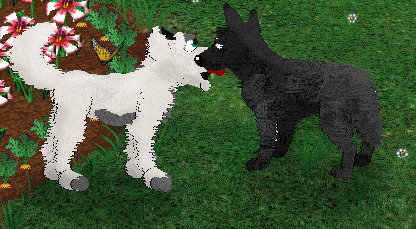 Nightfall: *Kisses her* You're amazing, you know that? And you just made me the luckiest dog in the entire world
Frostsong: I love you
Nightfall: I love you too, and I can't wait to make memories with our new family in the new house.
--Later that night-- 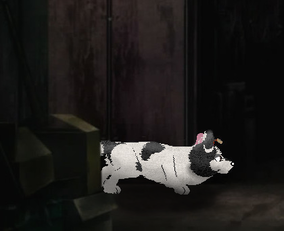 Mystery Girl: I hope they don't notice that I'm sneaking out again, but I have to see him... I have to tell him... No, I can't tell him. I just need to see him. 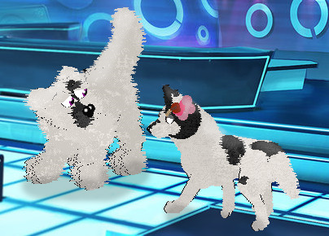 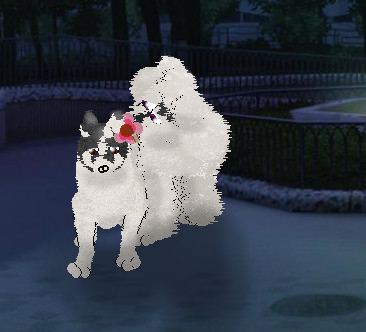 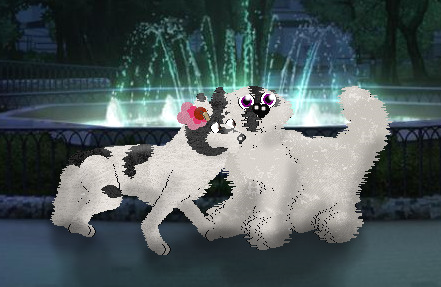 Beth: *snuggles close to him and giggles* You dork
Tchaikovsky: But I'm you're dork, and you love me
Beth: Yes. I. do. *kisses him* 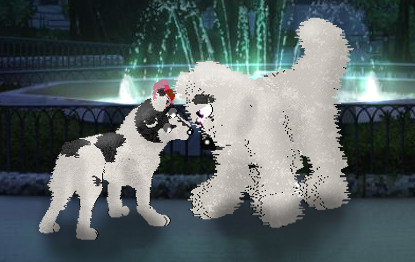 Beth: I'd love to stay with you all night, but my sister's will be worried if they find me missing.
Tchaikovsky: Can you stay just a few more minutes?
Beth: I wish I could, but I have to go.
Tchaikovsky: Before you go there's something I need to tell you.
Beth: What is it?
Tchaikovsky: I'm moving. I don't know where, my owner didn't say. If it's not far I'll come visit as often as I can but...
Beth: Don't worry Chai, we'll make it work. I promise.
Tchaikovsky: I wish you would let me walk you home.
Beth: I'm sorry, but you know it would be even more trouble for me if I was caught sneaking out to see you
Tchaikovsky: Would your owner really mind that much?
Beth: ...yeah...
Tchaikovsky: *sighs* Alright goodnight Beth, be careful going back and tell your sisters I said hello.
Beth: Goodnight *kisses him before running off into the night* 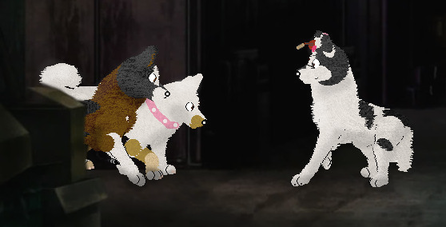 Belladonna(White): Where have you been Beth?!
Beth: *jumps at the sight of her sisters waiting for her* Nowhere...
Laurel (Brown): Because we believe that, come on let's go talk inside. 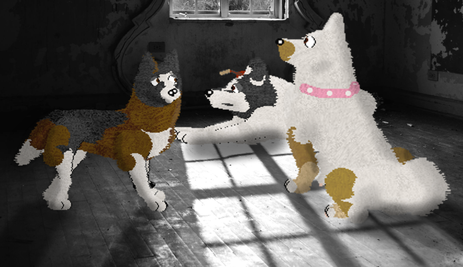 Belladonna: Now talk, and this better be good.
Beth: *lays down and mopes* well...
Laurel: You've been acting weird recently too, what's going on?
Beth: *sighs* I've been sneaking out to see the guy I met on New Year's eve.
Belladonna: How could you be so reckless?! Do you know what would happen if someone found out that we live on the streets?! We'd be thrown in the pound where we could be separated or worse.
Beth: *whines* I know
Belladonna: Is that everything? Does he KNOW?
Beth: He knows I have two sisters, but he doesn't know about our living situation... or the fact that I'm pregnant...
Belladonna: You're what?!
Beth: ...
Laurel: Beth? Are you okay? You know we can't take care of more mouths, we can hardly feed ourselves...
Beth: I'll figure something out.
Laurel: Would he help you if you told him?
Beth: His family is moving. Tomorrow.
Laurel: *sighs* Well, I guess it's too late to do anything about this now. Alright Sis we'll figure something out, after all sisters stick together.
Belladonna: I'm going for a walk.
Beth: *whines* She's really disappointed in me, isn't she.
Laurel: *licks her on the head* She's just shocked and needs time to process things, she'll come around eventually. Anyway tell me about this guy that you've been seeing, I should at least know a little about my kinda brother-in-law.
Beth: Well... (tells her about Tchaikovsky)
Click for Part 2
Powered by